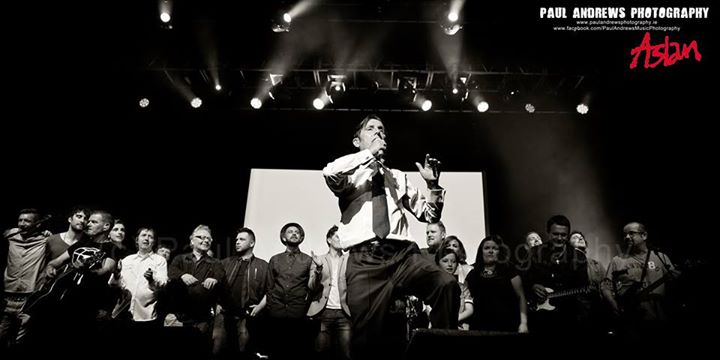 Hi Gang!  FANTASTIC! AMAZEBALLS! BRILLIANT! These words do not come close to describe what happened in the Olympia Theatre on Friday!

To ALL the artists who came together for Christy and put their hearts and souls into their performances… a BIG BIG THANK YOU from all in Aslan for taking the time out from whatever you were doing and coming on board to help our singer Christy Dignam.  From U2 to Jedward, medicine and everyone in between, you have given Christy a was a tremendous boost in the battle he is having.

He laughed, he cried, he enjoyed each and every one of you as you did your thing for him. To Bono, Larry, Adam & the Edge, I cannot describe the feelings every one of us felt as you performed “This Is” for Christy. I know from being in a band for over 30 years, how much time and effort on your part it took to do what you did. It was a very beautiful version. If there is every ANYTHING we can do for you, just give us a shout!

To all the committee who made this happen, you guys are the best. All the meetings we had paid off and the gig ran so smoothly. It’s a credit to you all.

For the calmness that Guggi brought to being MC for the night, to Tony Fenton whose wonderful words brought me close to tears. For the tight reins that Paddy McPolland held in getting the acts on stage on time, to Brian Whitehead and Denis Desmond for giving us the Olympia for the night. To Mark Downey (AMA Music Agency) for his amazing effort and late late nights making sure the streaming happened. Every one of you involved should be so proud of yourselves.

To Paul Andrews and Daz Murphy who made it a joy to look at visually.

To Peter McVerry and Declan Crawford who came up with the idea in the first place!

To Svenn from the charity Cradle and his team and all the hours they put in. To all the crew and music companies who gave their time and their equipment free of charge. Thank you all!

A very special thanks to our crew; John “Smokie” Shiels, Lee, Steo, Fozzie Farrell, Stephen Andreuchetti & Adam. To Sabrina in Mission PR, thank you for letting the world know about the gig x

And to all of YOU. Our fans. Our Supporters. Without you, we would never have been around for over 30 years. You really are the best. You made the gig. You all sang, cheered and went to venues around the world to watch a band called Aslan perform. THANK YOU, THANK YOU, THANK YOU.

Now all we need is Christy to get well and get back to doing what he does best.

See you down the road.