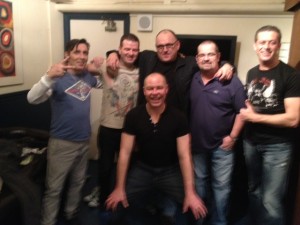 What a gig in London last Saturday! AMAZING venue, this FANTASTIC crowd, AMAZING atmosphere.  We want to hank everyone who was at the gig.  You really created an amazing atmosphere.  After the gig we went into O’Neill’s pub next door and it was great to meet up with people who had travelled from Scotland, Wales and of course Ireland to see the band.  WE also got to meet up with one of our first roadies, John SHELLY Smith (pictured with us) who came to the gig.  He now works for Mumford and Sons.  It was great to see him after all these years.

In the airport on the way home i saw Rod talking to Glen Power from The Script.  It turns out they know each other from way back.  HE is a dead on bloke and told Christy he loves “Too Late for Hallelujah” and he’s coming down to see us in Vicar Street in December!

At the moment I’m sitting by the pool in Dubai… ha ha! Only messing! We flew out on Wednesday and we’re staying for one week! We’ve had an extra date added due to demand in Bonnington Towers.  We play Thursday & Friday night 22nd & 23rd November (Blog wrote a few days ago).  I’ll let you know how we get on!

We have also been back in Joe’s studio working on a single for charity.  When it is finished, i will give you all the info.  If any of you are planning on going to Vicar Street, i would not leave it too long to get tickets as it’s selling REALLY REALLY well and is going to sell out way before the date of gig.  All tickets are gone for IMRO night in copyright house in Baggot Street.  The word on the street is we are receiving 2 awards from IMRO.  One for 30 years together and one for the Nudie album going to number 1.  It’s going to be a great night!